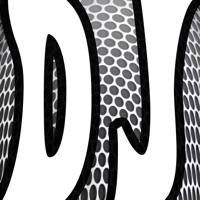 Looking to take your game introductions and announcements to the next level? Look no further than the BallparkDJ mobile app. This complete solution for professional voice and music intro creator app is a great tool for all varieties of youth sports. And introduce every conceivable situation with SuperVoice! No matter what you call it: walk-up, walk-out, walkup, walkout, intros, introductions, or announcement; BallparkDJ delivers professional introductions and announcements. BallparkDJ is not just for baseball and softball but for any youth sport: football, soccer, lacrosse, cheerleading, basketball, hockey, and much more. Players, parents, and coaches absolutely love it! Why? Three reasons: Sports. Music. Kids. They belong together. • Add a Unique Flare to Youth Sports Adding professional introductions and music to baseball, softball, or any youth sporting event is finally super-easy and fun AND very inexpensive! Download BallparkDJ and try it for free to produce professional walk-up and walk-out voice and music intros. Once you're certain it fully serves your needs for athletic audio you can activate the unlimited version from within the app for only 6.99. Unlimited teams. Unlimited Players. • The Only App With Pro Sports Announcers Order custom voice overs from pro sports announcers like Ryan Cameron of the Atlanta Falcons and Atlanta Hawks! The voices you hear at MLB parks from teams like the Braves, Cubs, Angels, Mets, and Rays can now introduce your youth sporting event through BallparkDJ! Make your team feel just like they are walking out on a major league field in a big league game for a one-time fee of $2.99/player. Not into the professional introductions? No problem! You can use your own voice for the announcements! • The Only Easy to Use, Complete Walkout App on the Market Your job as a call announcer has never been easier. The ease of use and rich features of our professional intro app, your team will love your walkup introductions and music. --------------- • SuperVoice is Here! What could be better than professional introductions from major league voices for youth sports? Professional Introductions powered by SuperVoice! SuperVoice will infuse your player introductions with over 30 of the most popular events in your respective sport to empower you to professionally announce every possible situation at your sporting event. Now, your 1 team operates as over 30 teams! Here’s how it works: • Tap on a player, then tap on the appropriate action, and SuperVoice takes care of the rest. • SuperVoice combines up to 4 different voice components into one seamless introduction opening the door to countless possibilities. • Insert special effects, team name, team chants (or anything you can imagine) into each introduction, anywhere you wish. • SuperVoice can be blended with each players favorite song. SuperVoice will bring yet another level of awesome to your BallparkDJ experience. • Pre-Game Continuous Full-Team Intro created automatically • Apple Music Supported Song Assistant with Auto-Match makes music sharing and matching easy and hassle-free! Also combine professional intros with each player’s favorite song with Apple Music auto-matching support! Add in flexible starting positions, durations, and overlap. Add and change songs as often as you wish for free. • Team Sharing and Duplication Going to miss a game? No problem and No stress! Simply share your team with any other coach or parent. It's quick and easy. You can even duplicate your team for multiple sets of walk-up songs, line-up orders, or full-team intros. • Continuous Play This option makes it easy to create entire team pre-game intros with one song playing behind the entire line-up with a tap of a button. And So Much More including Team Sorting, Team Subtitles, Team Duplication, Importing Players Between Teams, Tip of the Day, Benched Players, etc.! Your game day experience will never be the same. What's your theme song? 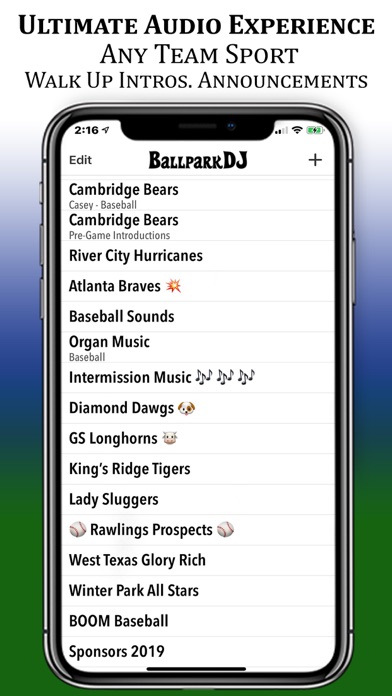 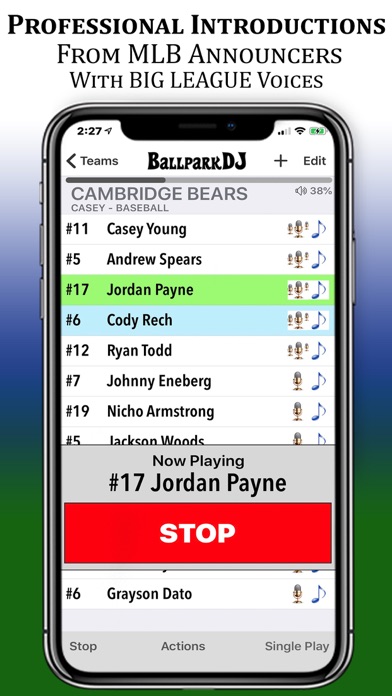 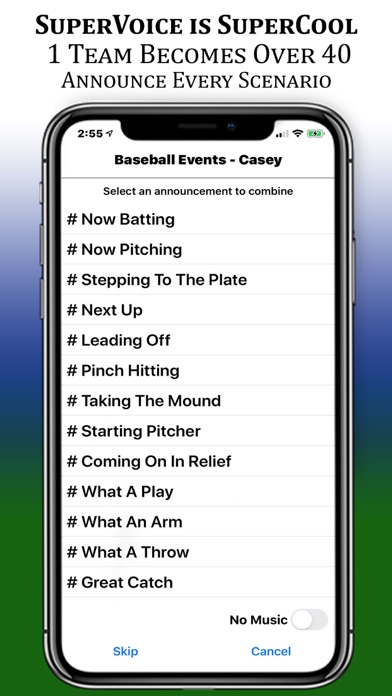 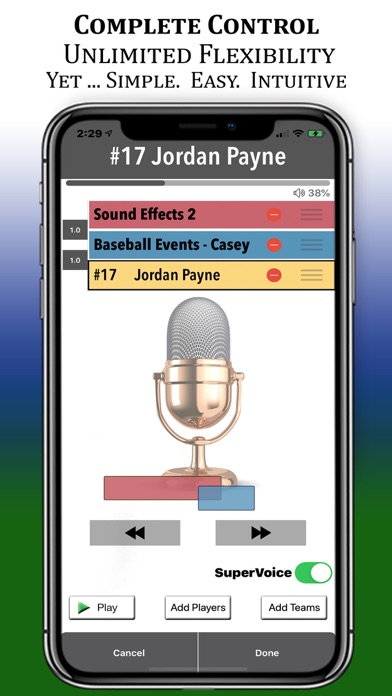 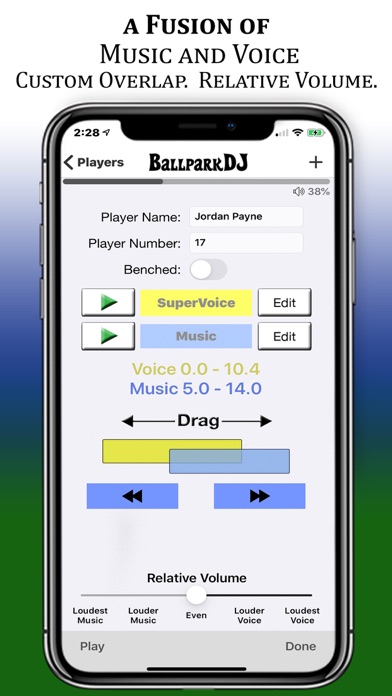 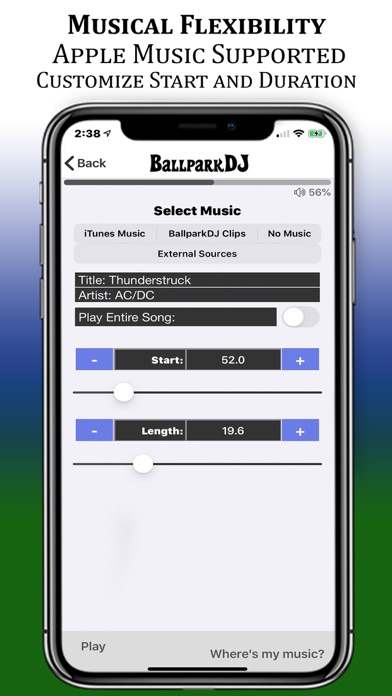 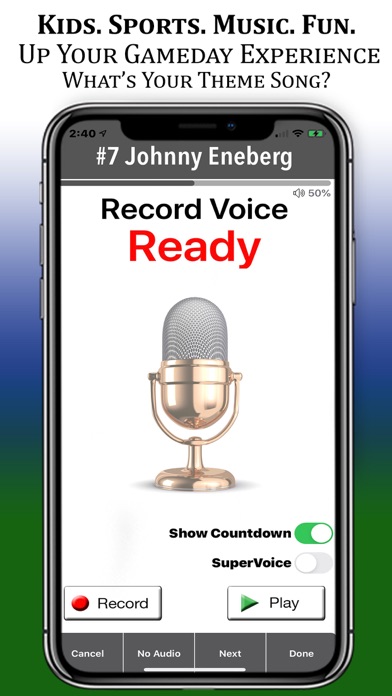 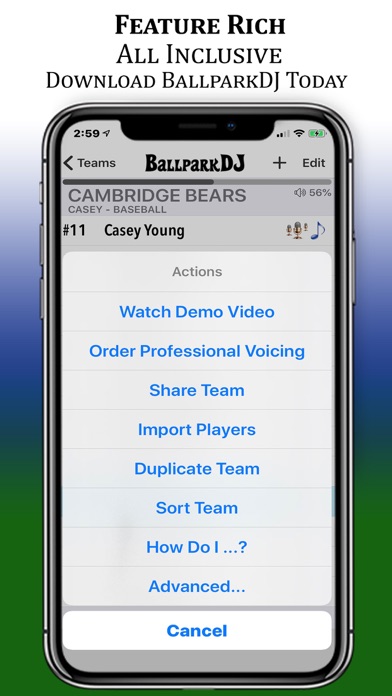