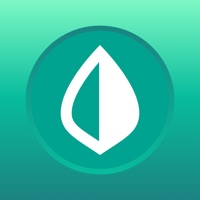 Experience a fresh way to manage money. Reach your goals with personalized insights, custom budgets, spend tracking, and subscription monitoring—all for free. Easily see your monthly bills, set goals, and build stronger financial habits. Get the #1 personal finance and budgeting app now*. Mint is the money management app that brings together all of your finances. From balances and budgets to credit health and financial goals, your money essentials are now in one place. Join the 24 million users that trust Mint to help them reach their goals. ALL YOUR MONEY IN ONE APP Your spending and financial accounts all in one place. See your credit balances and transactions with one tap. Mint gives you a more complete picture of your financial health by bringing everything together: account balances, monthly expenses, spending, your free credit score, net worth, and more. Connect your cash, credit cards, loans, investments, and more. MONITOR YOUR CASH FLOW Mint helps track your transactions, budgets, expenses, and subscriptions. We bring together all your numbers to show your net worth and spending trends. Get alerted when you’re close to going over budget and before you overdraft from an account. We’ll notify you when subscription prices go up and uncover old ones you don’t use. SPEND SMARTER AND SAVE MORE WITH PERSONALIZED MINTSIGHTS™ Find new ways to make your money go further. Mintsights will take a deep dive into your accounts and uncover new ways to make every dollar count. Plus, get convenient alerts that keep you on top of your budgeting, spending, account balances, credit score, and more. Use our money tracker to get a quick view of your financial health. BETTER BUDGETING AND EXPENSE MONITORING Make every dollar count with our budgeting feature. Get a smart budget based on your spending on day 1. Mint provides budgeting tips and advice to help you save for your goals. We’ll work with you to create budgets that are effective. Plus, keep tabs on your balances with our budget tracker. SEE YOUR BILLS LIKE NEVER BEFORE Track bills right alongside your account balances. Our bill tracker makes it easy to manage your recurring expenses, helping you keep tabs on your debt. Plus, get bill reminders so you can put an end to late fees. Expense tracking can help you reach your goals sooner. TRACK YOUR IRS TAX REFUND Check your refund status and date estimate in Mint when you file with TurboTax. We’ll notify you when it arrives in your account. STAY FOCUSED ON YOUR FINANCIAL GOALS Set custom financial goals in our budgeting app and get actionable tips tailored to you. With our money management advice, you can see and celebrate your progress. We’ll help you make the most of your money. GET YOUR FREE CREDIT SCORE & CREDIT REPORT See your free credit score & credit report whenever you sign in. Get fraud and identity alerts and updates to your score in one money management app. REFINANCE FASTER AND GET MONEY SAVING OFFERS Apply for a refinancing loan in Mint. We’ll prefill your app with your Mint data, so you can lock in an accurate rate in just 8 minutes. Plus, get exclusive money-saving offers from our partners. This includes credit cards, investments, loans, and more. STAY SECURE Protecting your data is our top priority. We’re serious about keeping your account safe and are constantly improving our security measures. See more here: https://www.mint.com/how-mint-works/security#toc *based on all-time app downloads FROM INTUIT INC. Mint is part of a suite of financial tools that include TurboTax®, QuickBooks®, QuickBooks Self-Employed™, and ProConnect™. To learn how Intuit works to protect your privacy, please visit https://security.intuit.com/index.php/privacy By installing or using Mint, you agree to our Terms: https://www.mint.com/terms. Mint currently connects to US and Canadian financial institutions only. 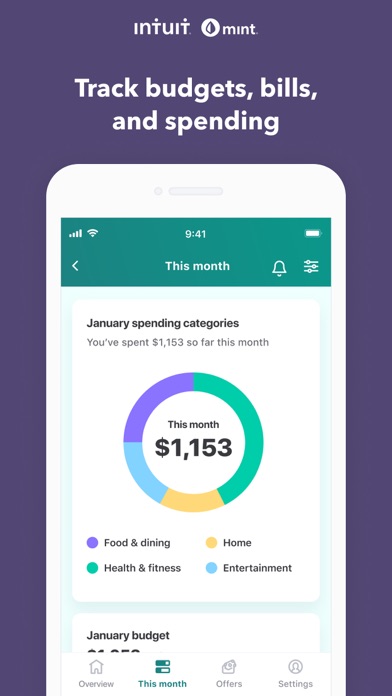 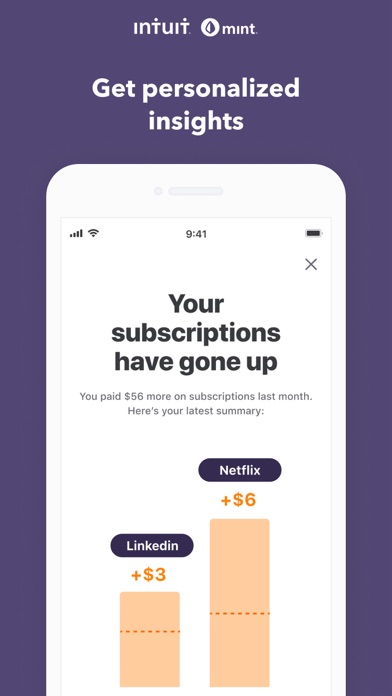 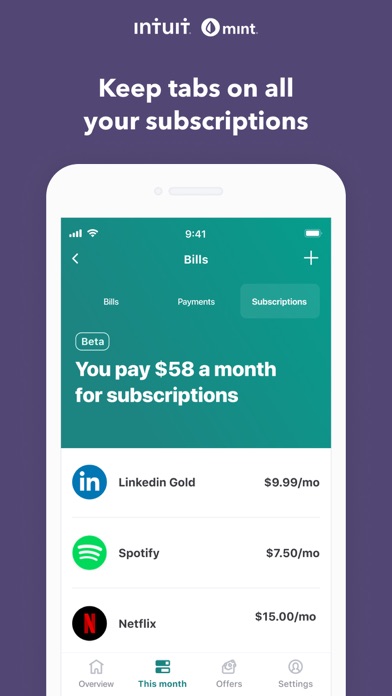 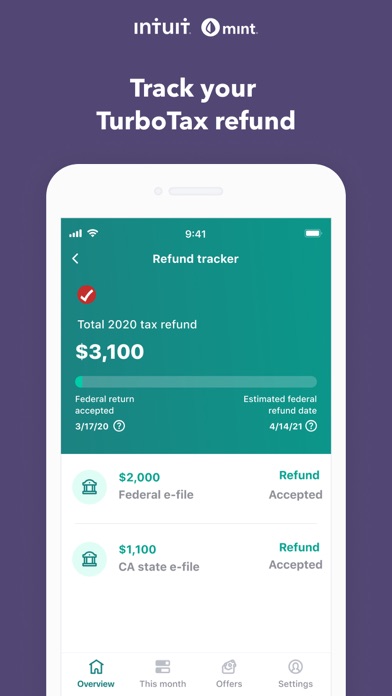 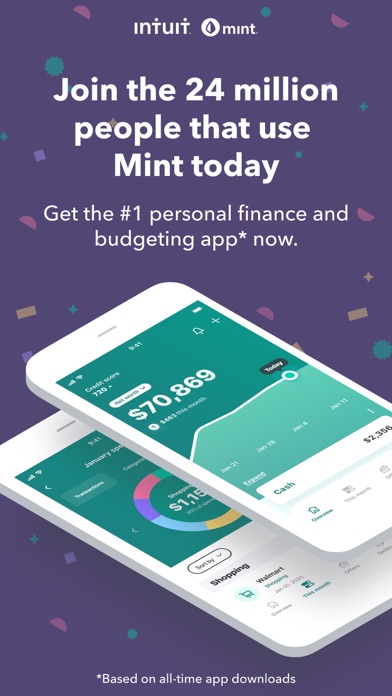 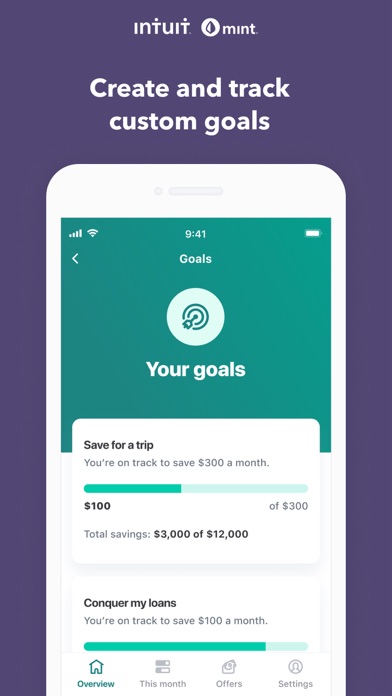 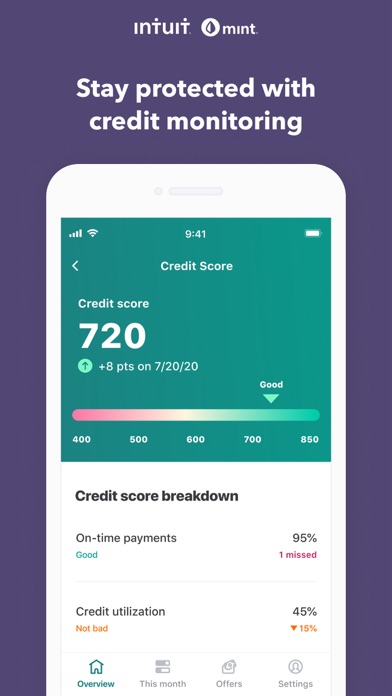 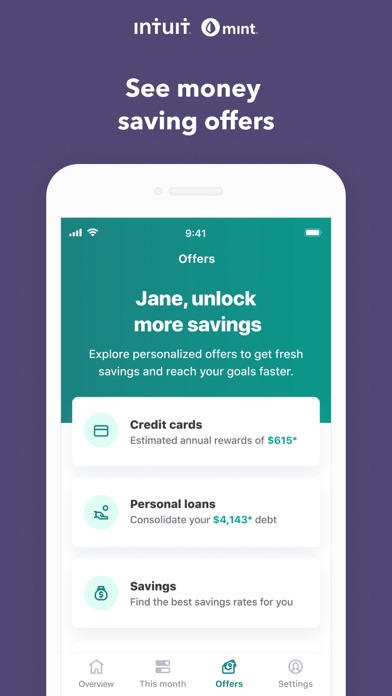 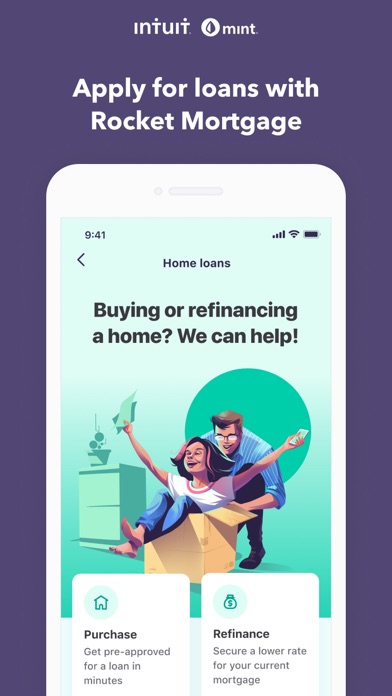