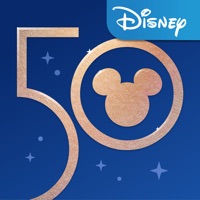 The official Walt Disney World® app! Now it’s easier than ever to plan & share your vacation details—at home & on the go. - Maximize your park time by taking advantage of our new Disney Genie service, which generates a personalized itinerary that guides you through our theme parks with tips that can help you reduce time in lines & take the guesswork out of “what’s next.” - Quickly access real-time wait times, park hours, Character Greetings, showtimes & more. - Use the interactive, GPS-enabled map to explore the Resort & easily see the dining options, attractions & more nearest to you. - Find your way around with step-by-step directions. - Purchase your theme park tickets.† - Browse restaurant menus, make dining reservations, modify existing ones & even mobile order meals from select locations. - Download, edit & share your Disney PhotoPass photos & videos throughout your vacation once you’ve purchased Memory Maker, a product that gets you unlimited photos taken by our complimentary photographers at select locations. - Search & filter activities to find exactly what you’re looking for. - Keep select Disney Resort hotel reservations, dining plans & activities organized—all in one spot with My Day & Plans. - Save time by starting your Disney Resort hotel check-in process right from the app. - Visit My Account to manage your Disney Resort reservations, tickets, MagicBands & cards, share plans with others & sign out. - Share plans with others through Family & Friends. Discover official content for Walt Disney World Resort, including our 4 theme parks (Magic Kingdom® park, Epcot®, Disney’s Hollywood Studios® & Disney’s Animal Kingdom® park), 2 water parks (Disney’s Typhoon Lagoon & Disney’s Blizzard Beach water parks), Disney Springs, select Walt Disney World Resort hotels & ESPN Wide World of Sports Complex. †Ticket sales are for residents of the U.S. & Canada only & may not be available in some countries. Ticket prices are in USD only. Have questions, problems, comments or suggestions? Reach out to us at [email protected] Connecting to the Internet in the parks: Without a strong Internet signal, wait times, park hours & schedules may not update accurately. You can see if your device is connected properly by checking under Settings. Note: Some features in this app will require your full name, country, birthdate & email address, as well as access to your location data. If Bluetooth is enabled on your device, this app will also collect your precise location information through beacon technology in order to improve your in-park experience, such as wait times. To facilitate the sign-in process, the app will also require access to your email address, stored within Account Manager. This app may request access to your camera to capture media & scan barcodes. Some Disney PhotoPass Lenses may use information on your device to detect face & hand coordinates. The app may request access to your external storage to cache certain data for offline browsing. Optional planning tools may also ask you to provide details about your travel party. Some features in this app include the ability to make purchases & will require a Wi-Fi or mobile carrier data connection. Guests must be 18 years or older to make purchases. Before downloading, please consider that this app contains in-app purchases that cost real money. The app provides you with the option to receive push notifications for information relating to your visit to a Park or a Disney Resort hotel. Terms of Use: http://disneytermsofuse.com Privacy Policy: https://disneyprivacycenter.com Your California Privacy Rights: https://privacy.thewaltdisneycompany.com/en/current-privacy-policy/your-california-privacy-rights/ “Do Not Sell My Personal Information” Rights: https://privacy.thewaltdisneycompany.com/en/dnsmi Important Info About Disney PhotoPass Lenses: https://disneyworld.disney.go.com/photopass-terms-conditions/#important-notice-about-attribute-lenses 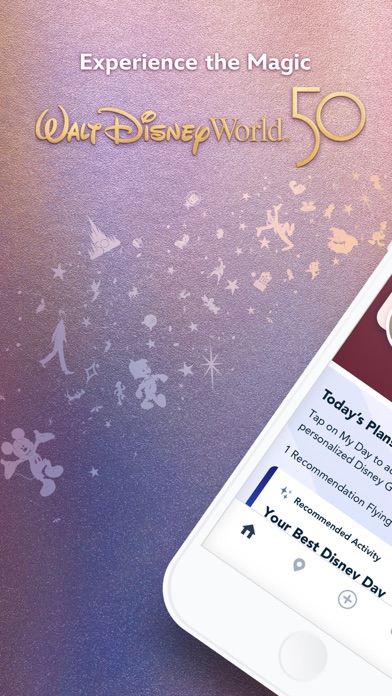 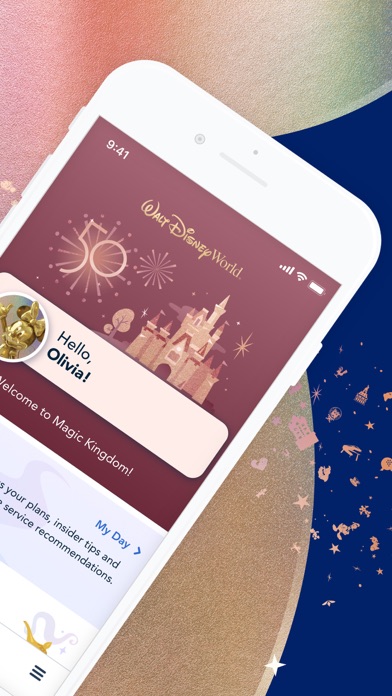 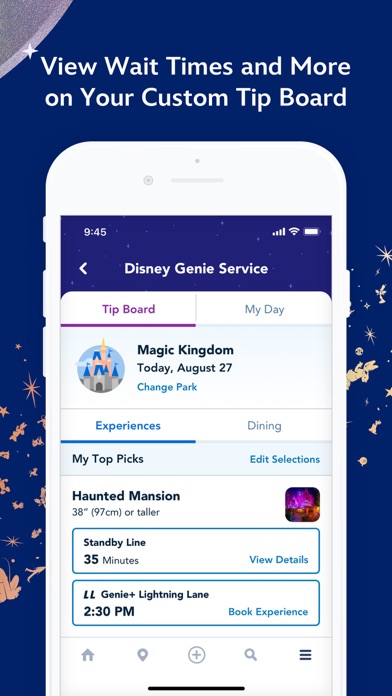 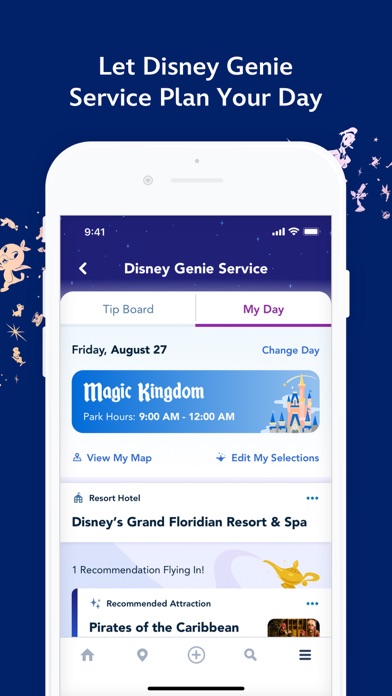 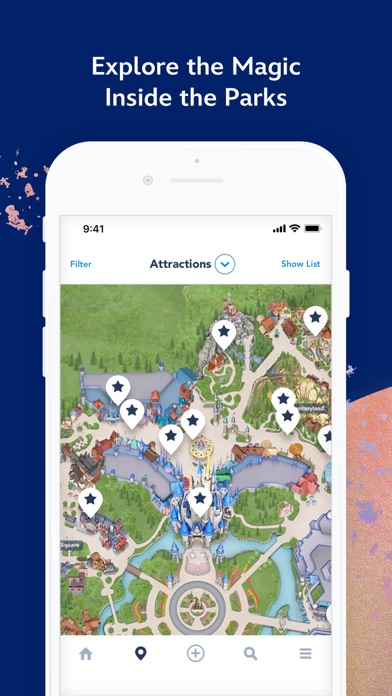 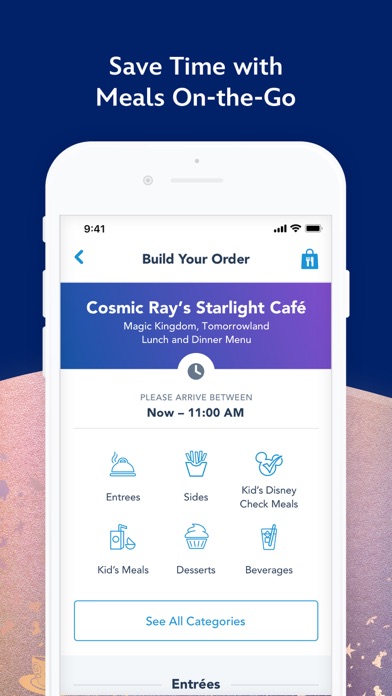 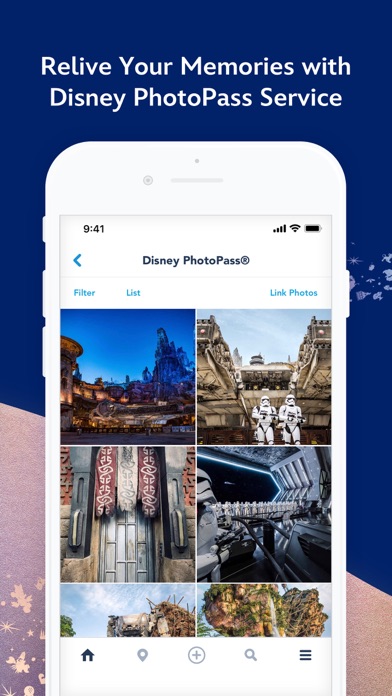 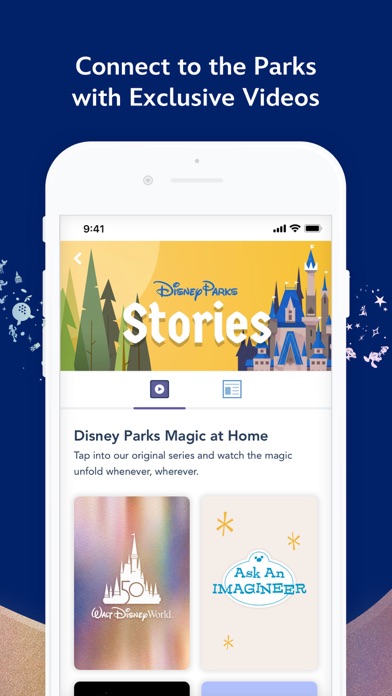