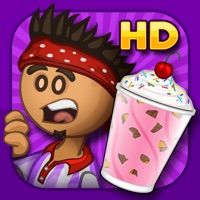 Serve up summertime treats in Papa's Freezeria HD, now available on iPad! NOTE: This game requires an iPad 2 / iPad Mini or newer. -- ABOUT THE GAME -- In this new edition of Papa's Freezeria, you'll be working at an oceanfront ice cream shop on Calypso Island, but your laid-back summer job gets hectic when all of Papa Louie's customers arrive on the island! You'll need to serve up delicious Freezer sundaes by pouring ice cream, blending mixable candies and syrups, adding whipped cream and toppings, and don't forget a cherry on top for that perfect summertime treat! This latest game features dozens of syrups, candies, and toppings that unlock as you play, and a variety of new and returning customers looking to beat the heat with your ice cream sundaes. The time-management and hands-on gameplay seen in "Papa's Burgeria" is back, with plenty of new twists for serving ice cream treats. You'll need to watch the lobby for new customers arriving, add ice cream and goodies to sundae cups, keep an eye on the blenders mixing your ingredients, and add toppings and syrups before serving the sundae to your wacky customers. -- NEW FEATURES -- This updated version of Papa's Freezeria features dozens of customers not found in previous editions of the game, as well as DOUBLING the amount of unlockable ingredients found in the original! We've also added new touch controls to make building and topping sundaes easier and more enjoyable on tablets. You can choose to play as Penny or Alberto, or you can now design your own custom character to work in the Freezeria! Create a boy or a girl, with dozens of hairstyles, hair colors, skin tones, and facial expressions. You can even adjust your head size, neck, eye and mouth positions to make your character look just right. You can also buy and earn new clothing for your worker, by playing Foodini's Mini-Games or visiting the Shop! Browse through hundreds of shirts, jackets, hats, pants, and accessories to give your worker that perfect look. Play new Mini-Games like "Saucy Shot" and "Mitch's Mess" after each workday to earn new furniture for your Shop and new clothing for your worker! The customizable lobby from Papa's Burgeria is back, now with various themes of new posters and furniture, and an easy way to change your trim and countertop colors in the shop! You can also earn 100 achievements for completing various tasks in the game, including serving sundaes with certain mixables and toppings, earning bonuses on the Build Station, playing mini-games, and earning Customer Awards. Papa's Freezeria HD also supports Game Center achievements and leaderboards! -- GAME FEATURES -- - Hands-on ice cream shop in the Papa Louie universe - Updated and remastered for iPad - Multi-tasking between building, mixing, and topping - New custom workers designed by you - 80 customers to serve with unique orders - Over 50 ingredients to unlock - Hundreds of furniture and clothing items to decorate your shop and worker - Challenging Closers and Food Critic - Various shop upgrades to purchase with your earned tips - 100 Achievements with Game Center support