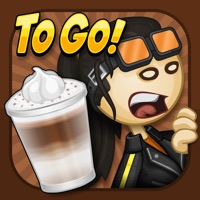 Create delicious coffee drinks and cannoli in Papa's Mocharia To Go! -- ABOUT THE GAME -- Papa Louie has opened a brand-new coffee shop in New Pepperton, offering a variety of custom layered coffee drinks called Papaccinos. After you apply for a job as the barista of Papa's Mocharia, you learn that a year-long film is being made about the coffeehouse -- and you're now the main star! Under the watchful eye of the documentary crew, you'll be brewing espresso, steaming and frothing milk, and crafting eye-catching layered drinks for your picky customers. Work your way through the holidays as you serve seasonal coffee and cannoli, unlock new ingredients, and earn Daily Specials with delicious latte and macchiato recipes. -- GAME FEATURES -- BREW ESPRESSO AND LAYER DRINKS - Use the Brew Machines to make freshly-brewed shots of espresso, and to steam and froth milk for the customers' drinks. On the Build Station, you'll layer the espresso and milk into a large cup along with colorful powders and flavored syrups, creating a delicious layered latte that looks as great as it tastes! Complete the drink with toppings, whips, and drizzles for that finishing touch. CRAFTING CANNOLI - Customers will order a custom-made cannoli along with their Papaccino drinks. Choose the cannoli shell, line up the nozzles to pipe it full of cream, and garnish the cannoli with delicious toppings for the perfect sweet treat to enjoy with a coffee. HOLIDAY FLAVORS - Celebrate the seasons with delicious holiday flavors! As you reach new ranks, the seasons and holidays in New Pepperton will change, and your customers will start ordering holiday-themed drinks and cannoli. You'll unlock new syrups, powders, dairy, shakers, creams, and cannoli shells for each holiday of the year, and your customers will love trying these new festive flavors! SERVE SPECIAL RECIPES - Earn Special Recipes from your customers, and serve them as the Daily Special in the Mocharia! Each Special has a bonus you can earn for serving a prime example of that recipe. Master each special to earn a special prize! CUSTOMIZE YOUR WORKERS - Play as Allan or Akari, or create your own custom character to work in the coffeehouse! You can also show off your holiday spirit with a massive variety of holiday outfits and clothing for your workers. Choose unique color combinations for each item of clothing, and create your own style with millions of combinations! SPECIAL DELIVERY - Some customers don't want to travel all the way to New Pepperton for their coffee. When you start taking phone orders, customers can call to place their order, and you'll hire a Driver to help take and deliver orders to their homes instead! COLLECT STICKERS - Complete a variety of tasks and achievements while playing to earn colorful Stickers for your collection. Each customer has a set of three favorite Stickers: Earn all three and you'll be rewarded with a brand-new outfit to give to that customer! DECORATE THE SHOP - Customize the Mocharia lobby with themed furniture and decorations for each holiday of the year! Mix and match your favorite styles, or add items that match the current holiday so customers won't mind waiting longer for their order. -- MORE FEATURES -- - Hands-on coffee shop in the Papa Louie universe - Multi-task between brewing coffee, steaming milk, layering drinks, and crafting cannoli - Custom chefs and drivers - 12 separate holidays to unlock, each with more ingredients - Earn and master 40 unique Special Recipes - 90 colorful Stickers to earn for completing tasks - 135 customers to serve with unique orders - Use Stickers to unlock new outfits for your customers - 124 ingredients to unlock 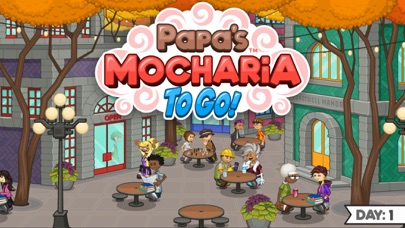 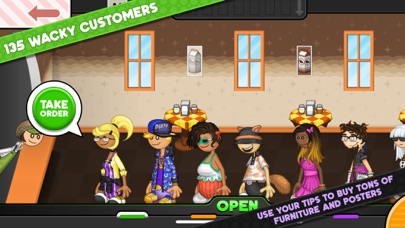 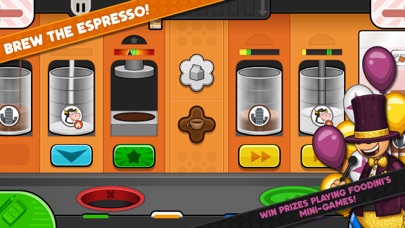 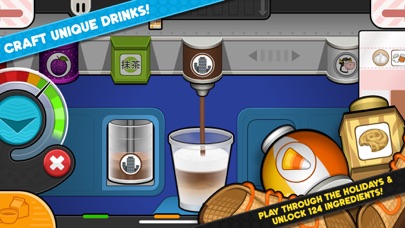 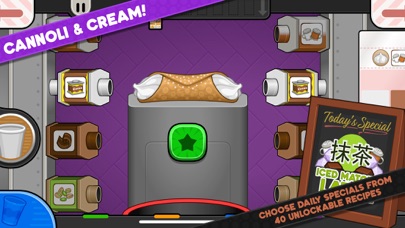